What’s Up With the Girls in Harry Potter? Hormonal Hermione & Other Thoughts 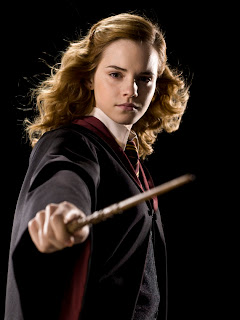 I understand it’s “JK,” not Joanne Kathleen, because publishers thought boys wouldn’t read a book written by a woman. I’m not sure if that’s legend or not, but I’m pretty sure I heard it somewhere in this excellent interview with Oprah, one that made me want to be JK’s best friend AND live in that hotel in Edinburgh where JK writes.

So in this context, perhaps it’s not surprising that boys dominate the story and very well should, if Harry is the star. There’s no literary law that says stories must promote girls to equal face time. I refuse to demand that of Rowling’s work. But I am interested in the female roles.

At one point I put down Book Three and thought, “Wow, Hermione’s pretty hormonal.” That conclusion made me nervous, so I thought I might need to examine the female characters more closely.

If we take Hermione Granger and Professor Minerva McGonagall as key females in the series (and keep in mind, I’ve only read through book three), I might draw these conclusions:

— Girls are incredibly smart. Hermione is the smartest one at Hogwarts and rarely without the answer.

— Girls follow the rules. Hermione is the first to list them and tell Harry and Ron not to break them, and Professor McGonagall often catches the boys at breaking them.

— Girls study hard. We don’t have to say much more than “Book Three” and Hermione taking almost every class available with a special time-traveler trick.

— Girls spoil the fun. Harry and Ron often avoid her since she’s a reminder of the rules and gets so mad when the boys break them.

— Girls serve as secondary characters. Or tertiary, especially in Quidditch. Is there any reason a girl can’t be a team captain, or is it just too much rugby on broomsticks? Though women do play rugby…)

— Girls get tearful and moody. A lot. Especially when they’re taking every class available while trying to reprimand their two best guy friends. Hermione remains pretty much a wreck through a good section of Book Three, after a seemingly tragic scuffle between Scabbers and Crookshanks. And I love Professor McGonagall but she’s a grump.

— Girls are brave. Hermione is not afraid of facing adventure when she deems it necessary. She even breaks a few rules for the sake of friendship. Without her knowledge, Harry and she can’t save Lupin, Buckbeak, and others in Book Three.

I really like Hermione’s defiance of Professor Trelawney in Book Three. By laughing in the face of mysticism and fortune telling (stereotypically the domain of women), she breaks the stereotype of women being “intuitive.” When she misbehaves in Trelawney’s class, it’s refreshing and real in the sense that Hermione distinguishes herself as not just a teacher’s pet, not just a rule-abiding nerd, but as a more unique, complicated teen.

I’m in the eighties of Book Four and so far, it’s the Quidditch World Cup and a lot of boy stuff (if we’re staying true to stereotype–sports, tents, high jinks, etc.). Hermione’s a shadow of herself thus far and I miss her.

I can’t say I’m impressed with the female roles, but I can’t say I’m disappointed, either. I love the series enough to realize I shouldn’t expect it to be all things to all people. And Hermione isn’t really a candidate for hormone therapy; her moods aren’t any worse than Ron’s. She just cries more.