What Sayest Thou, Cicadas?

Out, out, brief candle!
Life’s but a walking shadow, a poor player
That struts and frets his hour upon the stage
And then is heard no more: it is a tale
Told by an idiot, full of sound and fury,
Signifying nothing. 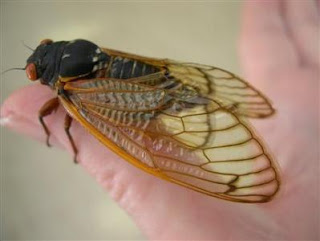 If you’re a North Carolina resident, you’re making peace with the alien, neurotic, machine-like whirring of 13-year cicadas recently descended in our midst. You may still cock your head as you exit the door–“What the heck is that?” Then your foot crunches on husks left behind, the shells of nymphs just exiting the ground. You see something sluggish and damp crawling through new grass and old leaves–a grasshopper gone worm?–and realize it’s a cicada drying its wings before it flies. You lean closer to peer at the red-eyed critter that’s been growing 13 years underground, one of billions emerging here in the South.

Then if you’re like me, you think, “Wow, all this sound and fury for what, a couple weeks above ground? You got a raw deal, critters.”

What was I doing back in 1998 when these brief little things were born? Besides entering my eighth year of teaching, I was cradling a four year-old novel close–not doing much with it, but still damn proud of the desire that birthed it. Little did I know my life passions of teaching and writing lessons would shelve my fiction till the summer of 2003. The North Carolina Writers’ Network Elizabeth Daniels Squire residency with Doris Betts helped me grow new shoots and seek sunlight in hungry ways I hadn’t felt in years.

Little did I know the novel would once again go underground in 2009 when ST. MICHAEL, PRAY FOR US, AKA HOW WENDY REDBIRD DANCING SURVIVED THE DARK AGES OF NOUGHT was born–hot and fast, furious like these cicadas. The 1994 novel–once called BUT YES–would re-emerge this year as the prequel to my current one: OUR WHITE LADY OF THE GENTLE SINS. Not so dead after all.

Some might call all these years since ’94 wasted time. Dormancy is deadness, certain folk might say. Only it hasn’t been a period of dormancy for my writing. Like the cicadas, my work was actively growing. Nancy Hinkle, a University of Georgia professor of entomology, shares how “The little nymphs are down in the ground, they’ve got their mouth parts attached to tree roots and they’re sucking the juice out of tree roots.” Apt image for us writers who seek out mentors, writers’ groups, books, conferences, and now, agents.

I envy the cicadas in some ways: they grow uninterrupted, the equivalent of an ivory tower gone bunker, and then emerge for one big mating party. They get ‘er done fast and furious. They leave a legacy in the soil. That has to signify something.

The 1994 novel has had a 17-year cycle, looks like. Not a periodical cicada, like the 13-year babies, nor an annual locust. The 2009 novel has been alive two years. But who’s counting? There’s no race here, though cicadas might have us believe their fretful drone says, “Rush!” Maybe they know something we don’t about the private life underground. There, where they can’t blog, Facebook, tweet, or brag, they do the tough work of sucking and growing, staying attached to the goal, eyes on the prize. And maybe their genetic code knows all along the fleeting nature of prizes such as publicity, fame, and other aspects of above-ground life. They stay focused on keeping the species–their stories–alive.

I get it, cicadas. That’s where I’m headed. Back to my stories breeding in the silent, breathless soil.

— What were you doing 13 years ago? 17? Write a scene from one of those times.
— What did you think you would be doing today that you’re not? What did you think that you’d be doing today that you are? What did you fear you would or would not do? What do you rejoice in?
— What is horrible about waiting? What is magical?
— Describe a time when you have been left completely alone and liked it. What happened?
— Describe a time when you were very quiet and experienced peace. What caused that? What was that peace like?
— What have you spent a lot of time, effort, and sweat doing but have not yet seen the results? How do you feel about the time, effort, and sweat? How do you feel about the lack of results?
— Predict where you will be 13 years from now, in 2024–physically, emotionally, intellectually, and spiritually. Write a scene from your future life when you emerge from the next 13 years.
— Dr. Marcia Mount Shoop shares a blog post called “The Sound of Emerging.” How would you describe your sound of emerging?
— Look at your writing projects and find the one that has needed the most growth. Why? What has that time on task allowed this writing that something shorter and faster did not need? What do you think will soon emerge from this writing?