— from a review of my novel, How Wendy Redbird Dancing Survived the Dark Ages of Nought.

How well did my novel capture race relations in a North Carolina high school? An author can fail at making a setting real or at making readers care about a character’s situation. The reviewer didn’t buy my portrayal of a world where white girls at Wendy’s school would say:

“This place has gone goth, ghetto, and Mexican.”

“I don’t see race. I think the people who always talk about it are the racists.” 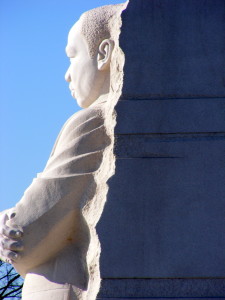 Perhaps the issue is characters talking about race too much. Maybe the reviewer’s point is that racism can be seen and heard but not necessarily discussed with the frankness or detail my novel uses.

Perhaps the issue is subtlety. The argument this reviewer makes against my fictional school, “racism central,” is that I should have captured the more subtle ways racism plays out.

But is it subtle if it’s your race that feels the discrimination? I’ve had few experiences with prejudice, and 99% of the time, it’s not been because I’m white.

Read Chapter 2 of my novel and see what you think.

Then ask yourself: What was the racial, ethnic, and socioeconomic composition of honors classes at your high school? What happened in your class when you talked about any literature where race relations were depicted? Which authors did you read in English class?

Who got suspended at your high school? Was it a mix of genders, races, and economic classes, or did it tend to be certain groups?

I wonder where this reviewer grew up and the demographics of the community. I wonder if there are any schools in the area that are desegregated but not integrated, where “separate but equal” lives on in its 2014 manifestation. Many schools are no longer Little Rock’s Central High School of the 1950s, but listen to today’s Central High students speak on the lack of integration:

A black side and white side of the cafeteria. If we aren’t truly integrated yet, what is the work left to be done?

When I read a book that touches on race, I might find my critique saying, Dear Author, Racism is still a real issue. Please render it more believably. I’m less likely to say, Racism is over. Please let’s talk about something else.

I see racism every day. Any racism is “over the top” to me. And as easily as we want to wish away a book’s portrayal of social injustice, I also wish it could stop so easily in real life.

Obama’s election didn’t solve racial hatred or resentment. It didn’t stop the fact that your grandparents survived Jim Crow or your grandparents helped keep it alive. It doesn’t change the fact that some institutions, run by certain cultures and genders, keep certain myths and prejudices alive. I’ve seen racism in my workplaces—white people confusing black people with one another, faces I can’t imagine could ever be confused. I’ve heard patronizing statements or questions asked about the education and competency of people of color, despite an excellent track record of performance. I’ve seen people make decisions–I’ve helped make decisions–that are ignorant of certain constituencies needs because I assume every grew up and thought like middle-class, white me.

Even last night’s playoff footage–the interview between black Richard Sherman and white Erin Andrews–can’t be seen without the racial lens all Americans bring. Why else would Twitter go wild with such racially-laden language that Erin Andrews had to step up and tone things down? Perhaps we could talk about football and sportsmanship only…but we can’t, because this is America, and we have a racial history in all things. I like how blogger Tommy Tomlinson takes a wider, athletic view of the landscape as he discusses the behavior–and context–of Richard Sherman, my fellow Stanford grad.

These small stresses every day—what is the long-term impact of these judgments and barriers on people reminded daily they wake up black or brown or yellow, not white? Does it become “over the top” after years of facing different treatment? I can look at the rate of heart disease in some communities and wonder how those trends happen. Is it purely genetics?

The point is to ask.

Acknowledging white privilege is not about browbeating whites or white people’s self-flagellation. It’s not about lumping all whites into one box. As a grandchild of immigrants who struggled hard to survive in the United States, who escaped war and privation to reinvent themselves here, I have some opportunity for sympathy, to better understand stories of those families who had fewer choices or life-and-death choices. (You can read about Katherine Schlegel Fuoco, my grandmother, here.) I don’t empathize with enslavement, but I can try to imagine. Acknowledging both the points of commonality and the points of difference is where I can begin. I can face facts of my ancestral privilege and wonder why.

A white person’s job isn’t to sound the gong of how horrible whites are. My job is to resist prejudicial habits and grow sensitivity and empathy. It’s my job to examine the tape of judgment playing in my head when I recoil at something, feel superior to anyone with what King called “the drum major instinct,” or want to separate people into categories. Ask why, right away, and wonder if my judgments are sound. Ask if I would treat someone of a different gender or race or sexual orientation differently in this same case. Ask. Think. That’s a start.

Racism is over, right?

Racism is over? Right on. Thank you, Dr. King, for articulating so well that dream we pray one day shall come to be, this dream that needs time, love, and labor still.

See my other posts on the topic of race relations in America.

My Grandma is a Racist?

How The Help Helps