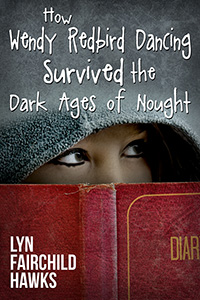 A Declaration of Dependence

After doing some July 4th musing about my goals, I proudly declare a hopeless addiction and utter dependence on writing. I’d do it even if I weren’t paid.

As a person who earns royalties for three books, payment for articles, and fees for editing, I get that writing deserves lucre and have no trouble calling myself writer. What I need to do is get to a place where I accept, sans guilt, that I am utterly dependent on writing.

There’s a picture on my web site of me at age eight, hand poised over a notebook, interrupted in the act of writing. No doubt I was busy crafting an imaginary world where runaway kids sought justice, where mouthy girls confronted vampires, where elves built little houses on their elvish prairies. I read voraciously and wrote constantly. I didn’t finish much at that age, but I started many a frabjous tale. I intuited then the unreal is pretty powerful for me and worth pursuing. I never questioned that need nor how much time to spend in the pursuit.

There’s that tension and another that Society whispers around every corner to just about every artist.

We’re all wired for something. I am wired to write, and yet the Big Girl + Society tend to question the daily sacrifices for the craft. Others will place that call to a friend, knit that rug, water that garden, and they don’t ask why do these things. But to the writer in the corner, both self and Society say, “You sure you need to be doing that right now?”

Why do adult concerns of bills, relationships, and tumbleweeds of cat hair quash the wisdom the child already knew? Perhaps because there’s something the world deems selfish and showy about writing. Writers’ acts are unadulterated communication. A carpenter or a gardener creates and their works may speak to us, but not in the same obvious, billboard way.

When the Lascaux mystery guys and gals scrawled on the cave walls, they scrawled to be seen. I have to believe they saw their work less like a personal journal and more like history’s scroll or maybe even a bible. These humans hoped to record, to remember, to reach, and to teach. They hoped to uplift their lives and others’ with their art.

I don’t write to tuck it away. I write for my words to be seen. I write for what’s seen to create change and touch lives.

There is nothing wrong with total dependence on writing. There is no wrong in daily following the lead of my hardwired DNA.

Say it ten times, and say it like you mean it.

That belief is a must-have if you wish to make your art known. That belief is a must-have if you’re going to query again and again. One glance at author Victoria Laurie’s stats is enough to help a hopelessly dependent one as myself keep the faith. She received 100 rejections, and it wasn’t the first novel, either. These stats come courtesy of the agent who asked her for revisions and who has partnered with her through 22 novels.

I like the goal setting questions at Shrinking Violet Promotions. The process has helped me shape passion into logical plans.

Yes, Virginia, methinks there will always be doubt some days haunting my art. Yet I have found money and a room of my own. All that’s left is to silence certain voices.

Do you declare dependence on writing as the work you’re born to do?